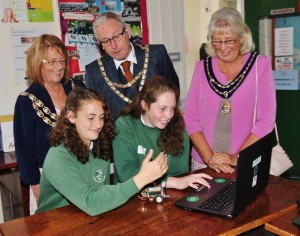 190 year 9 girls from North Somerset and Bristol schools attended and each student  took part in 3 workshops out of 16 on offer. Two new workshops this year used Lego to build robots; one endorsed by the 100,000 Genomes Project demonstrated how small mutations in DNA produce big differences in the shape of proteins. Another new workshop processed student’s voices using Digital Signal Processing.

The event was also attended by the Mayor, Jos Holder, and Lady Mayoress, Ros Willis, of Weston and Chairman of North Somerset Council, Cllr Christopher Blades

The President of the Soroptimist Federation of Great Britain and Ireland, Ann Hodgson, was also present.  She came last year and said “It’s so good, I wouldn’t miss it – I’d like to do all the workshops!”

The event was very well received by workshop presenters  (one said – “Not to be missed – best organisation and best cakes!”), teachers from the different schools and by students.  One girl said “I loved designing a house to withstand flooding.  It was interesting and exciting to find new ways to save Bob from getting wet.  It was really fun.” Another – “I have enjoyed looking into various areas of science and exploring the science careers available.”

Weston Soroptimists would like to thank Churchill Academy for allowing us to take over one house for the day and for all their administrative assistance. Special thanks to the Headmaster for his contribution at the opening ceremony.

Next year will be Skirting Science’s 10th anniversary so be prepared for something special!